Every pregnancy is different and leading up to 39 weeks, the anticipation was building. Not knowing how or when I would go into labor left me just waiting for the moment. My entire second pregnancy was different from the first (and not sure if it was because we were having a little boy vs. a little girl). Savannah was born pretty much on her due date and this little guy decided to come early at 39+2 days. So here’s my birth story:

Leading up to the day of labor, things were changing rapidly. I was even cleaning baseboards the day or two before. Full on, sitting on the floor cleaning. Crazy, I know! The evening of Monday, March 12 I began having slight cramping and little bit more intense Braxton Hicks contractions. The morning of Tuesday, March 13 I had a friend over for a play date and I felt a lot of pressure when I would stand up or walk. A noticeable difference from the previous day. As the morning went on, I called my mom and she decided to drive down since she was going to be taking care of Savannah while we went to the hospital. My dad ended up driving me to my last OB appointment since Dan was working. He knew something was happening, but not enough yet to take off work. And with my parents here, I did have help in the meantime.

Around 8pm that evening we decided to finalize everything and make our way to the hospital. With Savannah, we waited too long to get to the hospital so I didn’t want to take that chance this time. I was told by my doctor that with the second, things would progress much quicker. That didn’t really seem to be the case for this little guy.

Upon arrival at the hospital, triage checked me in and hooked me up to the monitors so they could keep an eye on contractions and the baby’s heart rate. Several doctors came in and checked my dilation. I was at 2cm and seemed pretty comfortable according to them so I had several choices. We decided to walk the hospital to move labor along and after an hour returned to triage. I was still at 2cm but I was definitely more uncomfortable and could tell labor was coming VERY SOON. We decided to leave the hospital and return once the contractions were even more intense. This was around 11pm.

I labored at home until around 3:30am, woke Dan and he popped out of bed. He knew it was happening and couldn’t wait to meet his little man. We headed back to the hospital and this time it was clear that I wasn’t going anywhere. I was 4cm and the contractions were getting worse.

I labored at the hospital until I got my epidural around 7 or 8am. Once the epidural kicked in, I was much more comfortable. The nurses kept coming in and rotating me because Owen’s heart rate kept dipping. And they had me wear oxygen to help regulate his heart rate as well. They came in at some point and broke my water. This would help move labor along.

Around noon I was at 10cm and they made all the preparations for me to start pushing. The doctor was worried about his cord possibly being wrapped so they wanted me to push fast and get him out. I pushed for about 20 minutes and he was here! That part was much quicker than with Savannah’s birth.

And here he is! 8lbs, 4 oz of pure baby bundle! Sweeter than we could have imagined and looking a lot like his sister! We love you so much little man! 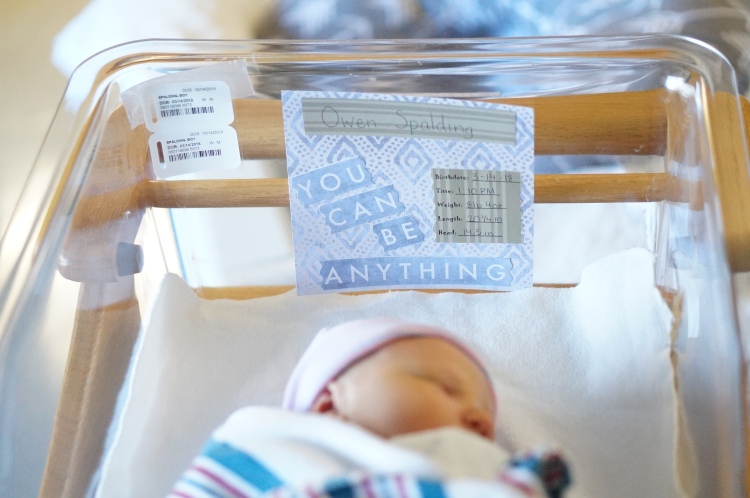 We say he came early to catch the tournament. GO CATS!!

Thanks for reading!
Kim

There was an error retrieving images from Instagram. An attempt will be remade in a few minutes.

Savannah and Company is a participant in the Amazon Services LLC Associates Program, an affiliate advertising program, designed to provide a means for sites to earn advertising fees by advertising and linking to Amazon.com. As an Amazon associate, I earn from qualifying purchases.